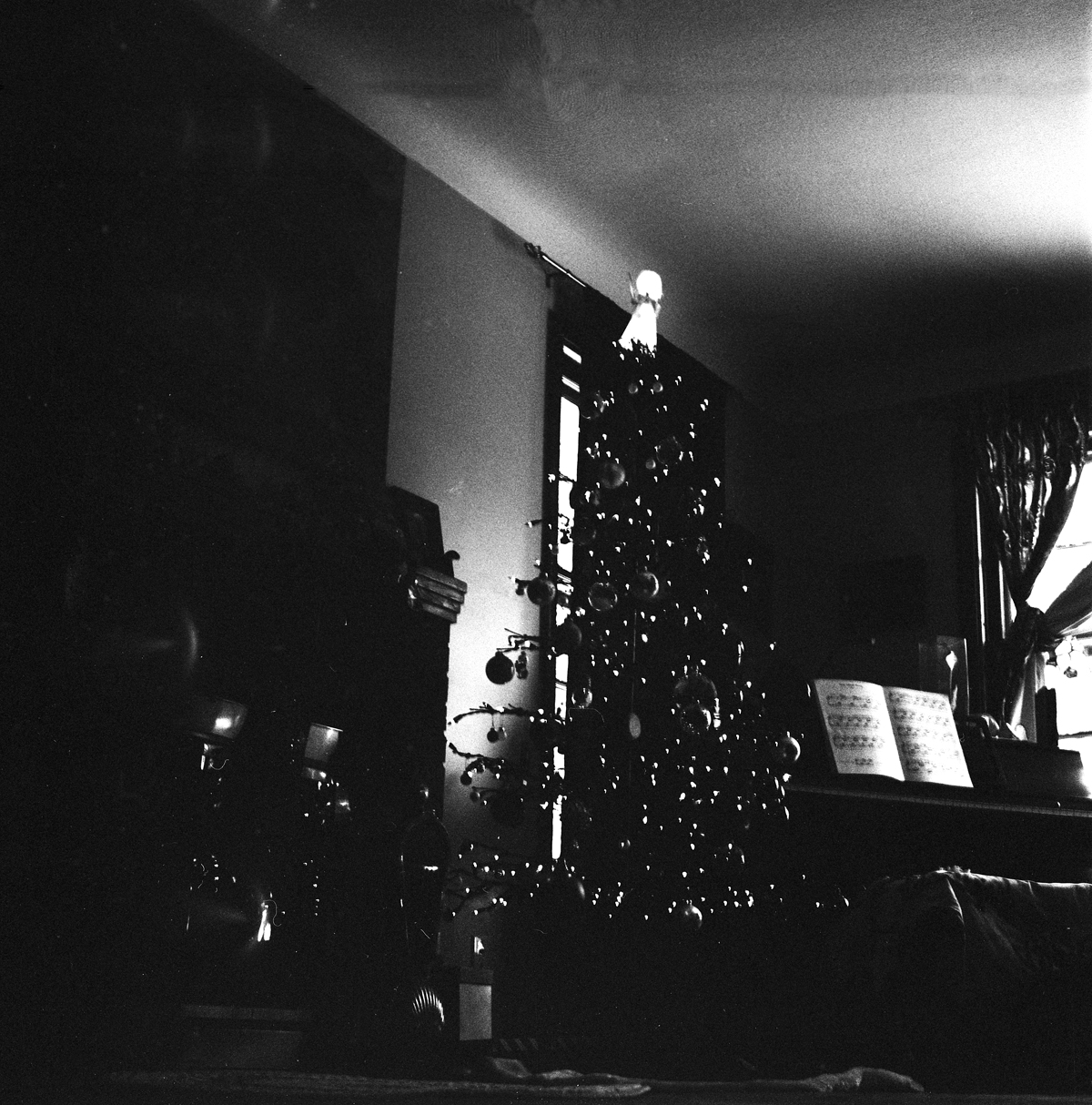 Home. And the start of a new 365. This year’s photo-a-day project will be on film, taken mostly with my Hasselblad 501c/m. In college, that camera felt like an extension of my body. I have realized that over the last few years it hasn’t. I plan to get back to it though.

I’m taking cell phone photos of what I’m photographing each day to help collect metadata in my journaling app so I can keep track of film, camera settings, weather, location, etc. We’ll see how long all of that tracking lasts! So why start a project on December 22nd? On this day, 10 years ago, my love came back from being overseas in Iraq. Christmas is always a special holiday for me, but the 22nd is the tops. This is my little way of celebrating it. 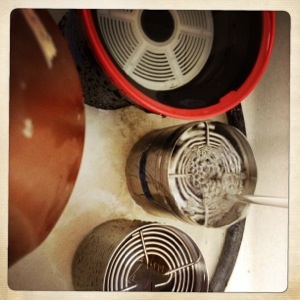 Last week I developed my first rolls of film at my new studio set up in the basement of our new home. My studio set up sprawls across three rooms right now. A tiny room that is home to my enlargers and print developing sink (it does not currently have a water hook up), the laundry room with a nice tub sink, and another larger room that holds my printing press, type cases, cameras, and supplies. (More photos of the larger room in a future post.) My first developing trial was a success! I’m am still missing my film drying cabinet (coming soon!) but was able to improvise. Now to get out and take more photos so I have more film to develop! I am hoping to take myself on a photo outing next week.

The film I developed this time was from the 2013 Back to the 50’s weekend. It is a large car show that takes place every year at the State Fair Grounds, not far from the restaurant my parents own. I think it is one of my dad’s favorite weekends! He and a number of his friends participate, showing off their old cars and trucks that they have lovingly restored. We have a breakfast celebration early the morning of car registration, and I always take lots of photos for my dad. Old cars look so good in black and white, in my opinion! This year I was photographing with an old Yashica twin lens camera. 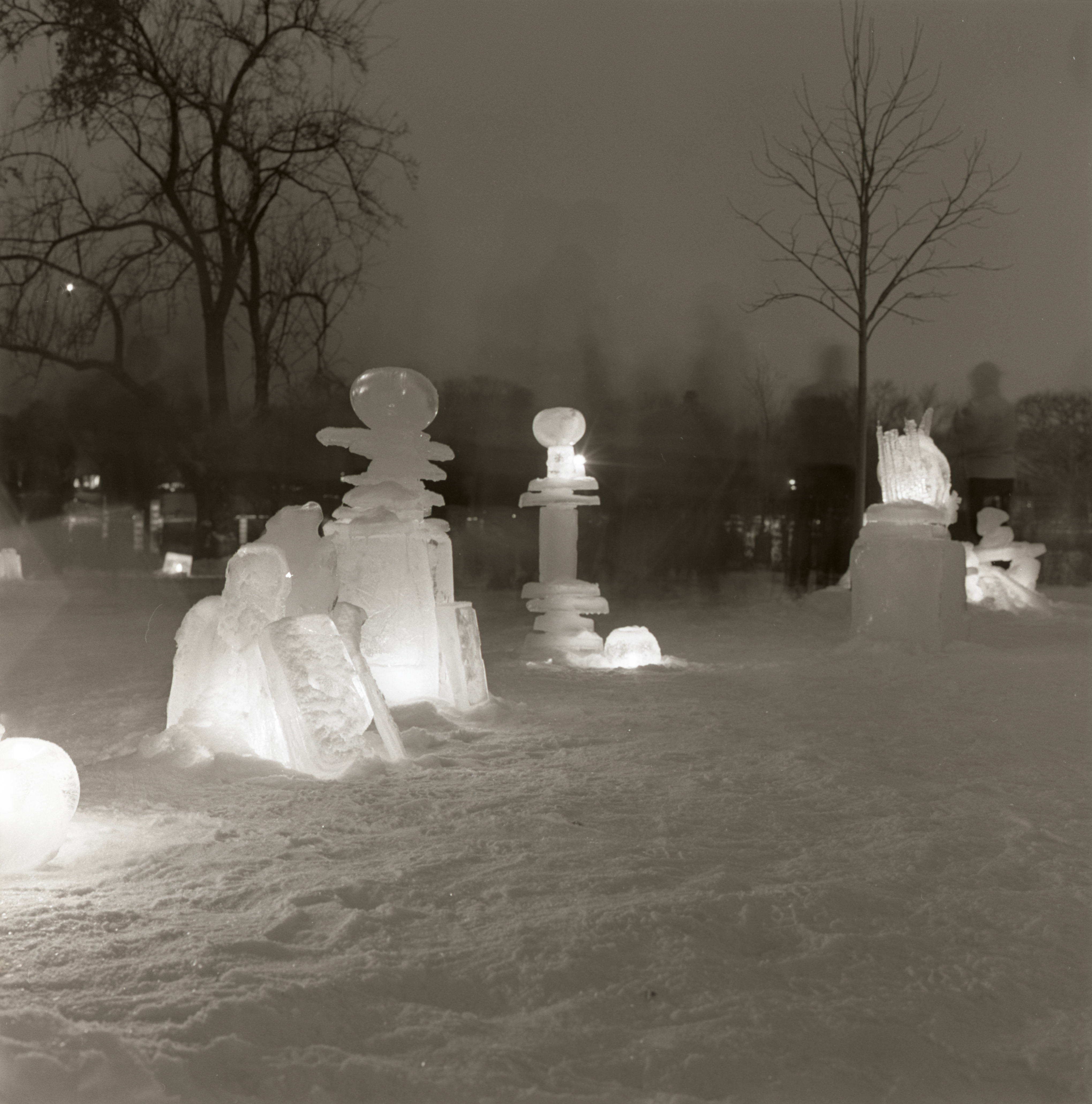 This may be the fastest I have ever gotten film photos finished and posted. I posted on Sunday a little update about the Luminary Loppet and going out to take night photos of the ice candles. I posted my digital photos, with the promise of film photos to come later.

Well, guess what. It is already later! On Tuesday I had a bit of time in my studio and was able to develop the roll of film I had taken, and today I managed to get the photos all scanned in and cleaned up. So here you go! Night film photos of the Luminary Loppet!

The black and white photos were all taken with Kodak TriX 400 film using a Hasselblad 501c/m camera at f11, one minute long exposures. I love how some of them look like they were taken in daylight, and others don’t. This is the un-predictability of film I adore, especially with night photos. There is no exact way to meter, but after a bit of practice, you get pretty good at guessing how long your shutter should be open. (The light trails in the back are cross-country skiers going post. Many of them had on colored glowing bracelets and necklaces.)

Below is the only photo I managed to get with my Sx-70 out there. After this photo, something stopped working. I’m hoping to get it back up and running soon. No, I am not at all a camera repair person, but The Impossible Project has a few really good tutorials and trouble-shooting guides. I’m hoping that will help me!

This photo was taken with the Px70 Cool film, probably around a 10 second exposure, and stuck in my shirt to develop. 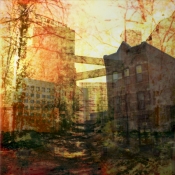 This is one of the last work in progress updates for a little while. 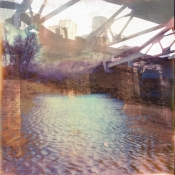 I received a text message early this morning from my grandpa, asking if I wanted to go out and learn to kayak today. It has been a long time since I have been out on Long Lake. I had a wonderful time, despite how much my muscles are complaining now. The feeling of floating on the water in the middle of the lake is still on my mind though, and I thought maybe it was time to post this work in progress.

Today, day 2 of my forced residency-style-stay-off-of-social-media-during-the-day-week I spent a large part of the day in my darkroom. It was wonderful! I managed to get my first roll of film from my new little Yashica 635 developed (Kodak TriX) and the film came out beautiful! This little camera is pretty mint! I also managed to get a few prints done of one of the images which will give me something to practice toning later. It has been awhile since I have done print toning…but I found that I have a bottle of metallic toner…unopened! Has anyone tried this before? I do need to get more blue though…

*I would post a photo here of the prints I did today BUT our network at home has sucked today and it is taking waaaaay too long to upload. Check out my Instagram or Twitter feed if you can. It will be up there soon as my 365 photo for today!*

Which brings me to a bit of a strange topic. I am realizing that I have camera preferences. I’m sure there are many of you saying “so??” but it seems like sort of a big deal to me. In many ways I feel bad saying it! I have found over the last two days of film developing and scanning that for medium format film especially I prefer the images from my two main cameras (my Hasselblad 501c/m and my Mamiya C330), my Holga, and now my Yashica 635 over the Kodak Brownies I have played with. I know I am not really making a fair comparison here at all, and I’m honestly not trying to compare. I just notice that I get much fewer usable images from the Brownies than I do from the others. Perhaps because the Brownies have a much slower set shutter speed? I just don’t have a ton of luck with them. I still have one more new-to-me Brownie to try, and I am definitely not giving up on the others, it is just an observation of my work this week. (Side note: I am still totally on board with the idea started by a few of my Twitter friends that Kodak should release a new Brownie type camera! This doesn’t change that!)

I think a major reason I am not a big fan of non-slr or tlr cameras, is that I am a very bad judge of distance. (Just ask anyone who has gone on vacation with me! I am famous for saying “oh, that isn’t that far, we can walk!” *an hour later* “Yeah, I really didn’t think it was that far!”) Therefore I have a really hard time figuring out how far I need to be standing back from an object for it to be in focus when I only have measurements to rely on and I can’t actually see that said object is truly in focus or not. I am practicing and trying to get better at this. I have been shooting a lot with my Lomo LCA which you also have to set distance and not just focus with. I have had fairly good results with that one, but I’m still having some issues. Does anyone have a rule-of-thumb or any good tips on judging distances for photos?

Tomorrow is a waitressing-day-job type of day for me. I do intend on uploading some new images to Flickr tomorrow night though. I’m also hoping to ride my bike into work tomorrow, and since I always have at least one camera with me, that could always lead to a small photo outing!

For now though, I’m off to bed.